One important component of SaaS that isn’t talked about enough is the “Winner Effect.” Simply put, the Winner Effect is all the benefits that accrue to the winner in a specific market that ultimately results in a significantly more valuable company. SaaS is well known for its high quality business model: substantial recurring revenue, high gross margin, and tremendous predictability. The Winner Effect makes the model even more profound.

Here are a few elements of the Winner Effect:

Another way to put it is that SaaS has a real network effect that snowballs as the business gets larger and larger and becomes the de facto winner in the market.

The Winner Effect is real. Entrepreneurs would do well to understand it and seek it for their business.

What else? What are some more thoughts on the Winner Effect?

Over the years I’ve spent many hours trying to figure out why some startups are successful, and most are not. The goal: distill startup success down into as simple a framework as possible. Of course, startup success is hard and messy, but it’s helpful to have a high-level context for the over-arching components of success.

Alright, let’s get to it. The three components of startup success:

Team represents the group of people working together to achieve the mission. Some of the most important attributes are resourcefulness, grit, and determination. Startups are an environment of limited resources, repeated failure, and long odds. Most people don’t thrive in a startup. The best teams figure out what needs to be done and makes it happen.

Stream represents movement and speed whereby disruption is happening, and it’s clear that a new, better way is possible. The best streams are large, major shifts where entire industries are transformed. The more disruption, the more opportunity for startup success. Examples include the shift from offline advertising dollars to online, the shift from telephone lines to voice over the Internet, and the shift from field sales to inside sales.

‘Not a meme’ represents things that are must haves, not nice-to-haves. Memes are funny or witty quips that represent a cultural phenomenon. As an example, Chuck Norris has a number of memes around things he can do that no one else can. One of my favorites: Chuck Norris gets Chick-fil-A on Sundays. 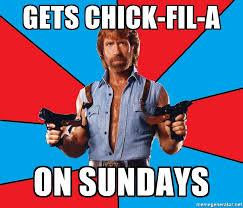 Most startups build nice-to-have products and fail. Nice-to-have can be a product that isn’t valuable, a product that’s useful but in an over crowded market, or something that’s too far ahead of its time.

Let’s take AirWatch, an Atlanta success story that VMWare acquired for $1.5 billion. The original team was comprised of the Manhattan Associates (NASDAQ:MANH) founder and another executive that had worked together before. The stream was the rise of the smartphone and people bringing their own devices to work (major transformations). The ‘not a meme’ was companies needing to enforce security rules and policies across thousands of employees’ smart phones. All three components — team, stream, and ‘not a meme’ — were combined with a massive market.

The next time you evaluate a startup idea for yourself, or meet with an entrepreneur, ask these three questions:

Answer the team, stream, and ‘not a meme’ questions correctly to predict startup success.

For our video of the week, watch the Google for Entrepreneurs Rapid Prototyping: Sketching & Paper Prototyping. Enjoy!

Forbes has an excellent article titled Starting Over: How FreshBooks Reinvented Its Online Accounting Service On The Fly. FreshBooks is a popular online accounting app (think major competitor to QuickBooks and Xero, but more focused on micro and small businesses) that’s been around for over 15 years. After 10+ years with the original application, it was clear that the product architecture and user experience wasn’t going to scale for the next 10 years.

We all know that the a full product rewrite is the kiss of death. What to do?

What else? What are some more thoughts on building a competing company to reinvent the business?

Earlier this year I had the opportunity to sit down with the Salesforce.com executive that opened the Atlanta office a number of years ago. After hearing that the Atlanta office was one of the most successful ones, I wanted to know the secret. What was the special sauce? Easy, he said.

The recession hit many years ago and all these mid-to-large companies in the Southeast were running Siebel Systems with annual license costs that were millions of dollars per year. Combine license costs with staff plus infrastructure and you get a serious line item in the budget. Now for the Salesforce.com pitch: cut your overall Siebel costs by 90% and move everything to the cloud. CFOs especially liked this message and Salesforce.com took off.

It’s been a number of years since the last recession and SaaS has grown tremendously. When the next recession hits, look for a new wave of SaaS products to run the same playbook and replace the expensive incumbents with a system that’s more modern, and much cheaper.

What else? What are some more thoughts on recessions and expensive software incumbents?

When a potential entrepreneur says they’re seeking startup ideas, I like to ask a few questions regarding areas of interest and domain expertise. Then, after going through the importance of customer discovery and getting feedback during the product building process, I offer up my favorite piece of advice: find the fastest growing markets.

Ideally, the market is small and fast growing with the potential to be massive — those are the best. Big companies ignore them because they aren’t worthwhile now but by the time the size is meaningful, it’s too late to get in. This is the perfect spot for entrepreneurs to build large companies.

What else? What are some more thoughts on finding the fastest growing markets?

After hearing hundreds of entrepreneurs pitch their ideas, I still can’t tell if the idea is a must-have or nice-to-have (see 5 Questions to Determine a Must-Have Product). In fact, I’ll never know as I’m not a domain expert in all the different markets and the best insight comes directly from customers. What I have figured out is that not having a must-have product is one of the top reasons for startup failure. No matter how great the team, and no matter how great the product, if the market doesn’t care about it, the startup won’t be a success.

Startup success is predicated on a must-have product. Choose the market wisely, and ensure the product is needed.

What else? What are some more thoughts on the idea that a must-have product is required for startup success and most startups have a nice-to-have product?

Critically, this is best executed in existing markets. If it’s a new, unproven market, SaaS 2.0 often doesn’t work because new markets need armies of sales people to get the new type of product in front of a buyer that’s never used it before. One of the key benefits of sales people is that they help orchestrate the sale and initiate the change management in the customer’s organization. Change management is hard and sales people help create the urgency to make it happen.

SaaS 2.0 products, typically being self-service, are best resegmenting an existing market where the value is known and the incumbents deliver an outdated customer experience.

What else? What are some more thoughts on the idea that SaaS 2.0 companies often resegment an existing market?

After talking about the The Next Generation Competitor to Every Public SaaS Company, it’s clear a better name for it is SaaS 2.0 companies. SaaS 2.0 companies are API-first, have rich, responsive UIs that are more conversational in tone, have approachable pricing models that are more flexible than the incumbents, and have a modularized platform so that customers can purchase only the features they need. With this definition in place, several people have asked for examples of SaaS 2.0 companies:

Look for more SaaS 2.0 companies to emerge that reimagine the entire experience in a new, more personal approach.

What else? What are some more examples of SaaS 2.0 companies?

Recently I was having a conversation with an entrepreneur about the most common characteristics of successful SaaS products. Thinking about some of the largest SaaS companies, including Salesforce.com, NetSuite, HubSpot, MailChimp, WorkDay, and Zendesk, there are a number of similar product attributes:

The most successful SaaS products have these four characteristics. When evaluating product ideas, consider these attributes and assess the potential.

What else? What are some more characteristics of successful SaaS products?